Sarah Palin Given The Bum’s Rush By Fox

The former vice-presidential nominee famously signed a huge contract with the network back in 2010, and she was once one of its marquee faces. In a Wednesday Facebook post, though, Palin let the world know that Fox News had canceled big-time on her for the whole evening. Notably, Wednesday is the night that Paul Ryan, the current Republican nominee for vice president, is slated to speak — making it rather odd that Fox News would not want to hear the last nominee’s perspective on the event. Palin was interviewed on Monday and then very briefly on Tuesday night.

Palin made no mention of Ryan in her Facebook post, though. Instead, she said she was miffed that she wasn’t getting a chance to laud John McCain, who is also speaking tonight. She posted a picture of the two of them, along with a statement:

I’m sorry Fox cancelled all my scheduled interviews tonight because I sure wanted to take the opportunity on the air to highlight Senator John McCain’s positive contributions to America, to honor him, and to reflect on what a biased media unfairly put him through four years ago tonight. Granted, our honored and esteemed war hero has gone through much more than the liberal media can ever do to him in their efforts to harm this patriot. I look forward to hearing his words to his fellow Americans tonight more than any of the other convention speeches. God bless John McCain. Thank you for everything. And happy birthday, my friend.

I’d say the GOP must have had a word with Roger Ailes and told him to keep her off the air while the convention is on. She was interviewed by Megyn Kelly on Tuesday for her reaction after Ann Romney and Chris Christie’s speeches.  Palin managed to get in a jab at Romney’s wealth and she used the word “big” three times in reference to Christie. What a nasty piece of work she is.

Last night she wanted to laud McCain’s achievements  (or so she said). How reminiscent that is of her failed attempt to give a concession speech nearly four years ago.

Needless to say, the dullards over at C4P are furious at this shocking treatment of Queen Esther. 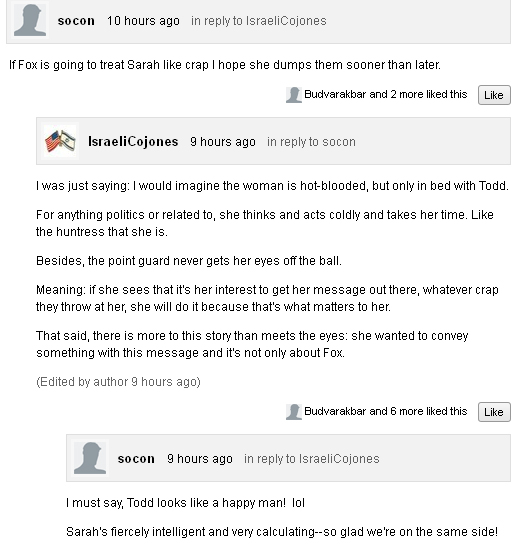 That is what they see in her! 😉